This website is part of a graduation project on gender bias in design, that was set up for the TU Delft, by me, Maartje van Proosdij. The role of gender and sex is often not considered when designing products and services, and this can have consequences for the useability and safety of the final design. With this website I hope to inspire designers and design students to consider gender and sex in their design process. If you have any questions, please feel free to reach out via e-mail.

Why should designers pay attention to gender and sex in design?

When we look at the gendered products in stores, we can see that companies often don’t go beyond “pink it and shrink it”; making a smaller and pink coloured version of existing products especially for women to use (fig. 1). It may not come as a surprise to many designers, that this is not the best way to design with gender in mind. What could come as a surprise, are the consequences that neglecting gender and sex in design can have.

This week in the construction of gender pic.twitter.com/AzWeL4d8Cv

Fig. 1: an example of “pink it and shrink it”, the earplugs for women are smaller than the standard ones, they are coloured pink, and the words used on the packaging are addressing prettiness instead of function. (Post by Brian D. Earp on Twitter )

We can find biased designs everywhere. Often, women’s lives are negatively affected by these biases because many of the things around us are designed with the average white male in mind (Perez, 2019), or mirror outdated gender expectations.

A relatively innocent example of a problem caused by using the average man as a standard can be found in smartphone design. The most common smartphones don’t fit the average women’s hands (or pockets), because they are designed for the average male hand size. The average woman is unable to use their phone one handed, reducing the functionality of the device (Perez, 2019).

It is not only women that are disadvantaged. Design that reflects outdated gender expectations can affect men too, for example, when it comes to parenting. When a father goes out with his baby it can be hard to find a place to change the diaper of the child, since changing tables are often only available inside the women’s toilets (fig. 2). Only recently did it become the law to In New York to provide changing tables in the men’s toilet, but this is not yet common practice outside of New York (RTL-nieuws, 2020). As a reaction to the recent attention to this problem, Pampers launched a campaign focusing on modern fathers. As part of this campaign, they pledged to install 5.000 changing tables in male bathrooms in the U.S (CNN, 2019). 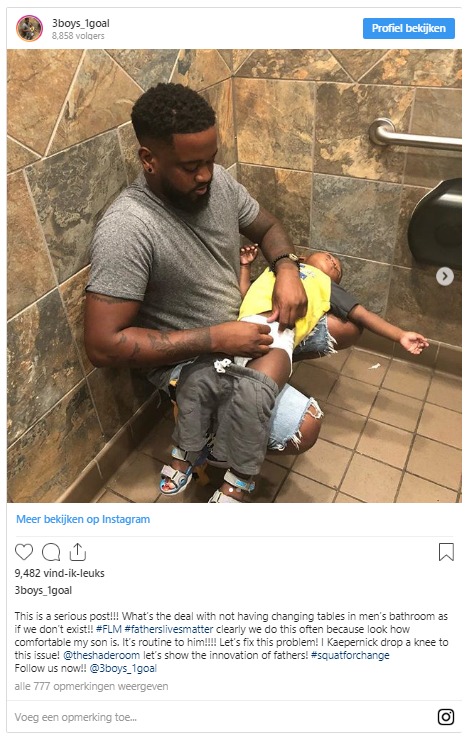 Not only is it inconvenient, it can even be dangerous when gender and sex are neglected in design. Car safety, for example, is tested with crash test dummies based on a p50 white male. Due to the differences in size and physique of men and women, a woman is 71% more likely to be injured and 17% more likely to die (Perez, 2019). Men that are deviating from the standard, are of course in more danger too.

Another example includes artificial intelligence. Artificial intelligence is used more and more to make decisions for us and about us, for example to help doctors with diagnoses, finding suitable job applicants and scanning through CV’s. For an AI to work best, it needs to be programmed in an unbiased way and needs to be trained on unbiased and complete datasets. In practice this can easily go wrong. Examples of this include the Amazon recruitment AI, which is trained on male CV’s and penalizes women (BBC, 2018), or Google Translate, having the tendency to change female to male when translating news articles (Zou & Schiebinger, 2018). Since AI is still growing, this could become a dangerous problem. There is still a lot of work to do to diminish the effects of human bias in AI when it comes to gender.

Biased design is often not a result of bad intentions, but of a lack of knowledge, perspective, and understanding, which is not helped by the huge data gap in human history, research and representation when concerning women (Perez, 2019). Many of the claimed differences between men and women are a result of what both sexes have been taught to believe (Rippon, 2019). From a young age, children learn that boys are strong and smart and girls caring and pretty. These stereotypes are reflected in children’s products and toys too. Toys with a science and engineering focus are three times more likely to be targeted at boys (BBC, n.d.). Schoolbooks often don’t include many women, and when they do, they are placed in old-fashioned roles (NOS, 2019). This gives children a restricted view of the potential of men and women.

By considering gender and sex in the design process, designers might be able to design products and services that fit better with their users. There are many areas where the needs of women or men are not satisfied due to assumptions of gender roles, or use of unrepresentative standards, that form an opportunity for designers, like the lack of parenting tools and products focussed on dads, the lack of bulletproof vests that fit female police officers, voice assistants that work well with higher voices etc. Designing with gender in mind is not only ethical, but also provides opportunities.

What is gender bias exactly? → ✉ Get in touch with Maartje →